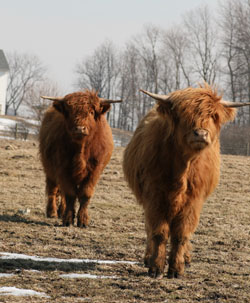 Highland Cattle are the oldest known registered breed. They originate from the Highlands of Scotland, where they roamed freely among the rocky crags and crevasses of the cold mountainous terrain. Originally there were two classes of Highland cattle, the smaller, black Kyloe, from the island off the west coast of Scotland and the larger, redder animal from the remote Highlands. Both are now regarded as one breed. Today the colors are black, white, silver, brindle, red, yellow, and dun. There are considerable differences of opinion among breeders as to which is preferable.

The Highland breed is hardy, thrifty, disease resistant, with a good mothering ability and generally calve without human intervention. Several strains have superior milking ability and were selected to provide the home milk supply for Scottish crofters, or small tenant farmers. Highland milk has a high butterfat content, generally 10 percent. It is not uncommon at all for a Highland cow to produce calves and milk well into her twenties.

Highland cattle will eat pretty much anything, except thistle, out of respect, I’m sure, as it is the national flower of Scotland. Extremely intelligent, they do not stress easily and are very even tempered. In fact they are generally quite docile, even the bulls. They make great pets!!!(yes, even with the horns) With other breeds, bulls generally do not make it past three or four years of age, as they get meaner and more difficult to handle with each passing year. Highland bulls on the other hand seem to get more laid back with age.

Highlands have a double coat of hair, a downy undercoat and a long outer coat which may reach thirteen inches and is well oiled to shed rain and snow. They do not begin to lose body heat until temperatures reach -18 degrees F, which means they need little or no grain to keep warm. This is also why they are so low in fat, as they rely on their hair to keep them warm instead of body fat. Highland Beef is actually lower in cholesterol than chicken, venison, codfish or buffalo.

Highland cattle were first imported into the United States in 1884, by a group of cattlemen who were trying to improve the stamina of their herds by cross breeding with Highlands. The American Highland Association was established in 1947, and can be found online. Today there are approximately 10,000 Registered Highland Cattle in the United States. A listing of all the Highland breeders can be obtained from the American Highland Cattle Association.

You will find that as a group the Highland breeders are generally friendly and more than willing to help someone get started. If we do not have the animals you are looking for or we are located too far away for you to visit, we will be glad to help you find someone who is closer or who has the animals you are trying to find. We are more than willing to help you find all the necessary information and help you will need to get started, so that you too, can produce and maintain quality Highland animals.